Visit this page each week to find a new video.

“We find our neighborhood to be so active and happy” – Abbasi brothers.

This week, as part of the NDG Intercultural Festival 2020, come and discover Arsam and Radmehr Abbasi !

Originally from Iran and now living in NDG, Arsam and Radmehr Abbasi are brothers who both share a love for music, in particular through playing the piano. Arsam, 17, had learned to play piano in Iran, and his brother Radmehr, 15, followed in his footsteps, learning it here.

Participating in the NDG Intercultural Festival gave them an opportunity to learn more about other cultures as well as use their skills to share theirs. Additionally, through the challenges of the pandemic including staying home and online schooling, their participation in the festival helped as a social activity.

The piece played by Arsam is called Godfather, and Radmehr plays a piece called Sonatine and Romance. Happy listening!

“This musical production is a tribute to all the Latin culture who leave their country and who with hard work, tenacity and sacrifice seek a better future for their family. This song presents a mixture of rhythms characteristic of our Latin peoples.

This week, as part of the NDG Intercultural Festival 2020, come and discover the ARENA Band!

The ARENA Band was created in 1987 by its director Harold Orejuela, who began his career at a young age in the city of Cali, Colombia, under the name of Sol naciente de América following an influence of Latin American musical genres, and in participating in some musical productions of the group Trigo Negro of the great master and producer Chucho Vallejo. In the early 90s Arena’s career began with Latin music such as Salsa, Merengue, Tropical, Boleros and others participating in the best clubs and festivals in the country for years, as well as at various public and private events while always transmitting the Latin flavor. In mid-2017, ARENA moved to Montreal. Now with more experience and following the wave of booming Latin rhythms, the band includes talented musicians residing in the city and coming from various parts of Latin America such as Cuba, Peru and Colombia, as they mix these elements to continue the musical work of ARENA.

“Someone told me that we could only feel how much we loved our motherland when we lived in another country for a while. Now I know that it’s true. (…) Music enables me to express my feelings as well as connect to other people.’ – Duc.

This week, as part of the NDG Intercultural Festival 2020, come and discover the Duc Tuong!

Duc-Tuong Nguyen, originally from Vietnam, worked as an electrical engineer before coming to Canada in early 2019 to pursue a Masters in engineering. However, ever since he was 14 years old, Duc discovered his passion for playing the guitar. Music continues to be an important part of his life.

A challenge faced by Duc during the pandemic was loneliness since before the lockdown, he had a great social life, always meeting and talking with friends. He turned to his guitar, through which he was able to express himself and brighten up his days, as well as that of others around him.

The song played is called “Beo dat may troi”, which means “Water-fern drifts, clouds fly”, a famous traditional folk song of northern Vietnam. The song tells the story of a woman whose love is far away, expressing her longing for him.

Listening to traditional folk-songs warms the hearts of many Vietnamese, no matter where in the world they might be. We hope you would also be comforted as you listen to the rhythms of this beautiful song, performed by Duc-Tuong Nguyen.

“During the pandemic, it was very important for artists to remain faithful to their profession, to their art, and it was quite difficult because nobody knows when the musicians will be able to come back on stage. It was time to think. Little by little, everything is returning to its habit, the cultural life resumes its course and we hope to continue to bring joy of our performances to people from Montreal. We are waiting for our old and new listeners during our concerts!» – Duo Gzhel.

This week, as part of the NDG Intercultural Festival 2020, come and discover the Duo Gzhel!

The duo Gzhel originated in Russia, before the artists decided to emigrate to Canada in 2017. Irina and Aleksei both studied at the Academy of Far Eastern Arts in Vladivostok, Russia. The love for music and the complementarity of their instruments, bayan (Russian button accordion) and domra (the three-string instrument that began life in Russia in the 12th century), were founding principles of this ensemble.

Russian folk music has won the hearts of many audiences in Russia, China, Japan, the Republic of Korea and here, in Quebec, thanks to the warm interpretation of these two musicians and the original sound of their instruments.

“I am extremely grateful to participate in this event as a member of the local Chinese community and I look forward to learning from other local artists” – Benfa.

This week, as part of the NDG Intercultural Festival 2020, discover the opera with Benfa!

Benfa began his journey to study opera at the age of 16. He holds a bachelor’s degree in music with a specialization in opera from the Shenyang Conservatory of Music in Shenyang, China. He has won national-level competitions while gaining valuable experience performing several arias by Mozart. After his graduation in 2010, as a full-fledged baritone he was enlisted in the PLA Beijing Military Art Troupe as a full-time performer. As a result of his outstanding work, he debuted in the Chinese Operatic scene and performed in hundreds of shows, including the Long March. He has also appeared as a judge on several talent shows, such as China’s Avenue of Stars from the national broadcaster CCTV.

Benfa came to Montreal in 2018 in hopes of improving his vocal skills, while also studying the essence of Bel Canto as an artist. Most recently, he has won several Chinese overseas competitions such as the China Water Cup Cube 2019 and has appeared as a guest performer on several occasions, including Montréal en Lumière 2019.

During his spare time, Benfa enjoys cooking, playing with his son, and exploring new cultures. He enjoys living in NDG and expects to continue living here in the future. Benfa strongly believes that mankind will defeat COVID in the foreseeable future so that everyone can come out and enjoy the show!

“My ultimate goal is to play the music of the world through the Oud, given the powers of its body and neck to cross all frontiers” – Chafik

This week, as part of the NDG Intercultural Festival 2020, discover the Oud or Oriental Lute with Chafik!

Born in 1983 in Rabat, Morocco, Chafik grew up among people who appreciated different styles of music, Oriental as well as Western. This gave him the opportunity to listen to different kinds of musical instruments before eventually falling in love with the Oud or Oriental lute.

With the help of videos and online courses, Chafik began playing the Oud at the age of 20, taking him on a journey of learning and discovery. As a result, he discovered the different schools – Iraki and Turkish – that have contributed over the years to the evolution of this musical instrument.

Chafik made his public debut with the group ‘DIAPAZONE’. This enabled him to perform and expand his knowledge of multiple styles of music, including Latin music and jazz. This also helped him forge links with other musicians and subsequently meet the group CLIMAX in 2015, with whom he has participated in several events.

His admiration for the Oud continues to grow with time. For FINDG 2020, he is accompanied by Lilia Bitar on vocals.

This week, as part of the NDG Intercultural Festival 2020, discover music from the Republic of Tatarstan – a federal subject of the Russian Federation with Kamila!

Artistic director of folk festivals at Tatar Cultural Centre “Miras”, Kamila wears several hats: she is an event coordinator, a voice trainer and a singer. Participating for the first time at the FINDG, she presents a poem called “İ, Tuğan tel” or “Oh, my mother tongue!” by the great Tatar poet, Gabdulla Tuqay. She is very happy and proud to share with us the cultural richness, music and traditions of the Tatar people. This song is a perfect marriage between Tartar poetry and folk music.

To learn more about Tartar culture and tradition, she invites you to visit:

“The FINDG is a space where everyone can learn from different cultures and admire the different manifestations that exist in them” – Hana.

This week, as part of the NDG Intercultural Festival 2020, discover the Oriental Bolero with Hana!

With more than 15 years of experience, Hana is a teacher and professional dancer. Her dance career began at the early age of 7 with folk dances from her country and later learned show dance which led her to the world of Oriental dances. A lover of Oriental culture, Hana, from Colombia, is a psychologist by profession. She has successfully merged her knowledge and practices (Hatha yoga, Tai Chi and Dance) to help people on their path to self-discovery.

On this occasion, Hana performs a fusion dance – Oriental Bolero. Participating for the second time in the Festival, she sees NDG as a meeting place, where you can learn from many cultures.

One of her biggest challenges during the pandemic has been to create new strategies to teach her dance and art therapy through virtual media. She is constantly looking for new spaces to share her knowledge as a body psychotherapist with those who need and wish to explore a path of emotional healing. 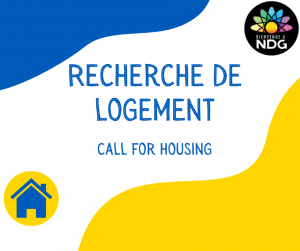 Soon families from Ukraine will start arriving in Montreal and they will need a place to stay. If you can offer free housing or low-cost accommodation for a short period of time, please get in touch with us. We are collecting information about available housing in NDG and we will connect Ukrainian families that request help with homeowners who are ready to host them. info@bienvenuendg.ca
Page load link